Well, to say that the last 18 months has been a roller coaster would be an understatement, and I hope that you’ve all managed to come through it relatively unscathed in all aspects of life. 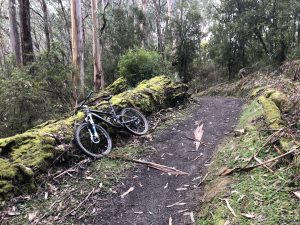 As far as club stuff has been concerned, it’s been pretty hard to organise much given the in and out nature of the shutdowns. You’ll have noticed that trail maintenance has been thin on the ground, we managed to get one off the ground at the start of last month which was very productive with three separate crews getting out on the trails and taking care of some much needed works. We were aiming for another to be on about now but the latest shutdown had that put on the back burner, Hopefully we will announce another one very soon.

One of the things that we have managed to keep forging ahead with has been the trail upgrades project. We’ve been working hard with Otway Shire, DELWP, Parks, Barwon Water and the community to keep things moving along. Pretty much all the studies have been successfully completed, with only a few minor tweaks to the overall project required as a result. Thus far $1.32m has been secured and is destined to trail works in the southern trail system over a period of time, as other grants and work in the background by government departments have covered the costs of project management and studies. Some of the studies carried out have been native title and aboriginal heritage studies with the Eastern Maar corporation looking for Aboriginal sites of significance, Arboreal studies in relation to effects of trails on the trees in the area and animal studies which have found amongst other things some Potaroo, Rufus Bristol Bird and Antechinus habitat.

As a result of these discussions still being ongoing we have some fantastic news to announce........

Just this week a trail builder has been selected to carry out a revamp of the top two thirds of Red Carpet and to winter proof the bottom section!

Adrian Marriner and his crew from “Living Trails” could kick off proceedings as soon as next week which will see rolling closures over the foreseeable future and it’s fair to say that we are pretty excited to see what they have in store for riders. These works will ongoing when the “Run Forrest” event will be held, and there are management systems in place that will let that continue with minimum disruption.

As per usual when any of these works are being carried out please obey the signage and trail closures, the trail will effectively be a worksite and ignoring those closures will place both riders and contractors at serious risk of injury. All going well there will be further tenders released for other works around the Forrest system and for a revamp of the Forrest Trail Head, with the aim to having more dirt tuning by the end of the year.

The club AGM is also looming on the horizon, once we have a date we will let everyone know.

And don't forget if you aren't a member of the club, join up now through AusCycling!!